How to Coach Hitters

Did you know - according to a USA Today study - that hitting a baseball is considered the hardest skill in all of sports?

Most players and coaches understand this. It's why we spend so much time teaching the mechanics and using batting practice drills to develop them.

But how much time are you spending on the "mental" side of hitting? Do your players understand how to approach the plate with confidence? What to do when they're behind in the count? How to adjust their swing for different hitting situations?

This article is designed to provide players, coaches and parents with specific  tips and pointers you can use  build confidence and develop your "mental hitting" skills.

You can use these coaching tips during batting practice, one on one workout sessions, or for pre-game pep talks. Let's get started! 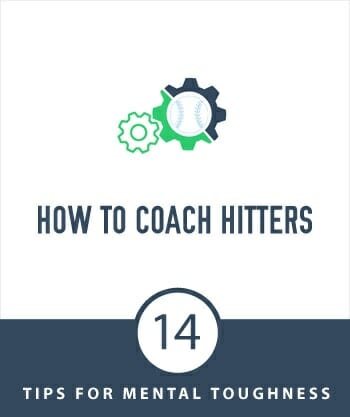 It’s not all about mechanics – we’ve all seen players with beautiful swings who just can’t seem to connect with anything, and players with truly ugly swings who seem to hit every ball who comes their way.

This is probably the most important thing for any hitter who wants to be successful. You need to be constantly telling yourself “I know I can hit” regardless of who’s on the mound.

Ask your coaches what your strengths and weaknesses are, and tailor your approach at the plate.

If you’re a bigger person with good power but less speed, you need to try and drive the ball deep, whereas if you’re a player with good speed you want to focus on contact and just putting the ball in play. Play to your strengths and you’ll maximize your effectiveness at the plate.

You have to mentally see yourself succeeding. Whether you know the pitcher or not, you can imagine all of your at bats the night before a game, imagining how you want to swing, the types of pitches you might see, and seeing all the work you’ve put in to build up your physical skills with your mind paying off.

Try to figure out how the pitcher is trying to get you out. First, you need to pay attention to how the pitcher works the batters in front of you, even ask them what kind of pitches they’re seeing.

Watch for everything – location, deception, change of speed, release points, anything you can to give yourself a leg up at the plate.

Fastball: The faster the pitch is coming in, the shorter your downswing has to be. Don’t try and swing faster because the ball is coming faster – let the pitch do the work. Be quick and short, and you’ll be successful hitting fastballs.

Sinker: The most important thing to hitting the sinker successfully is that you stay inside the ball. Focus on keeping your hands tight and inside and try hitting the ball to opposite field. Also, if you’re facing a guy who throws a lot of sinkers, you might try opening your stance up a bit, as this can make it easier to stay inside.

Curveball: Make sure you’re not hanging your stride up in the air, slowing down your swing and then trying to speed up again after is not a good idea. Put your foot down on time, wait back, and you’ll be able to handle them just fine. By wait back I mean even if you’re lower body is ahead of you, keep your hands back cocked, so that you still have that power on the off speed pitches.

Also, follow the rotation of the ball. For example if the ball is curving away from you, don’t try to pull it – you’ll just end up hitting a weak grounder to third – so hit with the rotation.

Slider/Cutter: Wait for one that’s inside or middle – you’ll have a tough time hitting one on the outside of the plate. But if you do need to swing on one that’s away, don’t try and pull it – aim to hit it out to opposite field.

Changeup: Hitting the change is a lot like the curveball. You can get fooled in the lower body, but keep your hands back. And don’t try to hit it too hard! Watch the ball right into contact with your bat, and be wary of the dip at the end at the plate.

Make things easier on yourself by always expecting the fastball. Start your stride as if the fast ball is coming, and if it ends up being a slower pitch, wait back up top until it reaches the plate – then swing.

If you try to do the opposite, expecting the slow pitch and then trying to speed up and connect with a fast pitch, you’re going to have a tough time just getting your bat on the ball, let alone hitting anything other than a foul ball.

When you try to hit the ball far, you’ll end up coming out of your power position. So focus on making the best possible contact you can from your batting stance, and the ball will take care of the rest.

When we tell ourselves to swing hard, we have a tendency to flex all our muscles, and try to swing the bat with as much power as possible. Instead try to swing fast, and stay smooth and relaxed – the bat and the ball will take care of the rest of the work.

A good swing is wasted everytime you swing at a bad pitch. The most important thing is to know your strengths and weaknesses, and to establish a box where you know you’re comfortable. Then wait until a pitch comes into that box, or you get two strikes.

Approach each pitch the exact same way. Don’t hang up in the air and let the pitcher or the pitch force you to change your swing – you always want to keep your stride consistent.

Don’t force the action! And don’t try to do too much with the ball. If you just trust your stance your swing, good things will happen.

One of the biggest causes of tension in batter’s holding their breath. To maximize your power and keep your swing tension free, gather your power by breathing in, then swing and blow your hands away, staying smooth and relaxed.

This is the exact same rhythm you would use when weight lifting to maximize your power.

Be flexible at the plate. If you’re getting beat inside, try swinging a little quicker and sooner. If the pitcher throws really hard, move back in the batter’s box a little bit.

This doesn’t mean you have to make a drastic change, you just need to figure out how the pitcher is trying to get you out, and put together a plan of attack.

Leading off: Try to see as many pitches as possible. This will have the effect wearing out the pitcher over the course of a game, but also gives your teammates a chance to scout the pitchers best stuff. Your other goal is to get on base, anyway you can.

Also, if you get a chance, drive the ball. Your teammates will have a much, much, higher chance of scoring you if you can hit a double off the bat.

Runner at 2nd, less than two outs: Your goal in this situation is to move that runner, but not just by sacrificing yourself. Ideally, you would try to drive the runner in with a hard line drive or ground ball to the right side.

Runner at 3rd, less than two outs: The goal here is to score the runner. However you’ll approach the situation differently based on how the infield is positioned. If they’re playing back, try to hit a hard ground ball to the middle of the infield, between the 2nd baseman and the shortstop – it’s a guaranteed RBI.

If they’re playing in, you just want to drive the ball. This is because the closer they move to you, the smaller their fielding range becomes, and the harder the ball is coming at them, the tougher it will be for them to react in time to make a catch.

Runners in scoring position: You’re job is to bring them in. Look for a high pitch, ideally a fastball, anything that you can drive and do some damage with.

Nobody on, 2 outs: Drive the ball. A single might look good for the stat sheet, but it would take another two, maybe three singles for you to score. Drive the ball and see if you can get at least a double and put yourself in scoring position for the next batter.

2 strikes: Use the 2+2+2 approach! Choke up two inches on the bat, move two inches closer to the place, and move two inches forward towards the pitcher. This is all because when you’re at two strikes, the pitcher is most likely going to try to work breaking balls away from the plate and force you to stretch out.

Now if you don’t like to move at the plate, just bend your knees a little more, getting in a lower stance. This will make it a little easier to see the pitches better, and you’ll be able to make better contact.

Hit and run: Here, the best case scenario is a ball hit well behind the runner. But if you can drive a ground ball, as long as it’s not going to the middle of the field, there’s a good chance you’ll find a hole in the infield because of the chaos a hit and run creates.

Run and hit: Here, you don’t need to swing. Here you’re looking to support the runner if need be, but there’s no need to swing on any bad pitches. If you have the ability to make contact and you think it might help the runner make second, go for it, but otherwise, take the pitch.

Bases loaded: No sweat. This is a great situation, and there’s no need to feel any pressure – because the pressure is all on the pitcher.

Wait for your pitch! But you still want to be aggressive. When you get that high fastball, look to drive it deep so that you can rack up as many RBIs as possible. 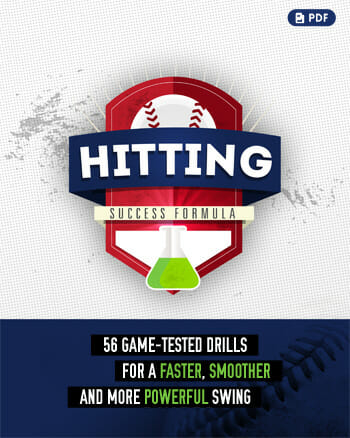 Like this article? Let me know what you think!