Fielding a ground ball in the outfield and the infield, while similar, are very different jobs. In the infield, the glove has to be quick to secure the ball, followed up with an accurate throw, usually to a baseman fairly near the infielder.

The outfielder however has plenty of time to line up the catch, but as such will also need to spend that time efficiently. This is because sometimes immediately after fielding the groundball, the outfielder has to make what is a very long throw. And the best outfielders know this, charging up to the ball and using their momentum to throw back to the infield in one smooth motion. This next drill will give your outfielders a look at three different methods, getting progressively more difficult but also progressively more efficient.

The outfielders will line up single file in the outfield facing home plate. A coach stands at home plate with a fungo bat and balls. An additional coach or players stands to the side of home plate to receive throws from the fielders.

The coach will hit a ground ball to the first player in the outfielders line. The outfielder will charge hard at the ball, breakdown, field the ball using the Knee Method, Semi-Knee Method or Pro Method, then make an accurate throw back to home plate. The coach will then hit a ground ball to the next player, as the first player rotates to the back of the line.

The Knee Method is typically taught to young players as the safest and most reliable way to field a ground ball in the outfield. You can also use this technique when there are no runners on base, when the ground is very bumpy, or when there is no chance of throwing a runner out. 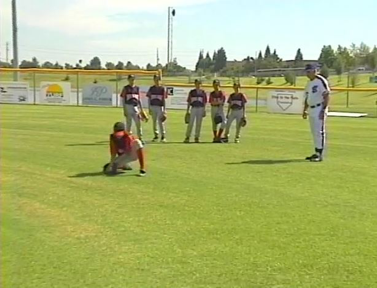 The Semi-Knee Method is a faster, but slightly riskier way to field a outfield grounder. The technique is the same as the Knee Method, except the outfielder will only drop the throwing-side knee halfway to the ground while fielding the ball. This will allow him to move into his throwing motion more quickly, and have a better chance at throwing out a runner 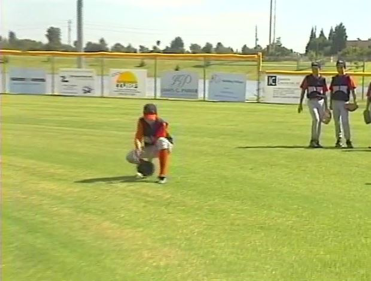 The Pro Method (or Scoop Method) is the riskiest way to field an outfield grounder and should be used only in situations where the game will be lost if the fielder doesn’t get the ball in quickly. This technique is for a do-or-die situation in which the tying or winning run is attempting to score and the outfielder must make a quick throw to the infield. The outfielder runs at the ball and scoops it up while on the move, placing the glove to the outside of the glove-side leg (instead of between the legs). If the ball is missed, it can run all the way to the fence, so use this technique with caution! 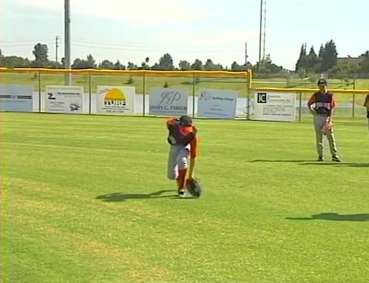 Depending on the level your coaching, the knee or semi-knee method may be preferred. But even for younger players, it’s a good idea to give them drill time so that they can build a base and be ready to try the semi-knee and pro methods when they’re at a more advanced level.